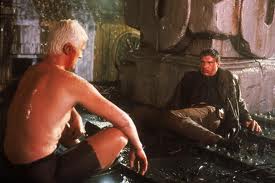 Blade Runner - The Final Cut
Roy to Rick
"All those moments will be lost in time like tears in rain" great line added in by the Rutger Hauer,
Quiet glad to say after watching the documentary and the few versions there were i watched the directors cut! no bad voice overs or "shinning" endings!
After watching the documentary dangerous day then the film, my appreciation for the movie has increased ten fold, without giving it all away the details that are in the film quite amazing and set the scene well, the film was directed and shot well, the effects and techniques used were great and very architectural in there construction and principle in creating the right streetscape for the futuristic film and Ridley Scotts portrait of the future.
The film was written, then designed and constructed, on a 1:1 scale as well as caring size models, every detail within the film was designed specially, graphical drawings to reproduce the mood for the scenes, there were casting from Frank Lloyd Wrights house in Deckards flat and similar to what we learnt in after effects the models were made for the camera so no wasted time or money on producing the large acid attached models. 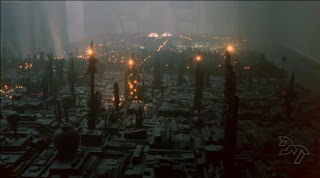 Possible Thesis idea,  could be to compare this Blade runner city to the Masdar Development designed by sir Norman Foster, the use of physical design and the similarities within the approach.
Posted by mjfraser at 00:35